“Triumph of Light over Darkness”

“The brighter the light the deeper the shadow.” 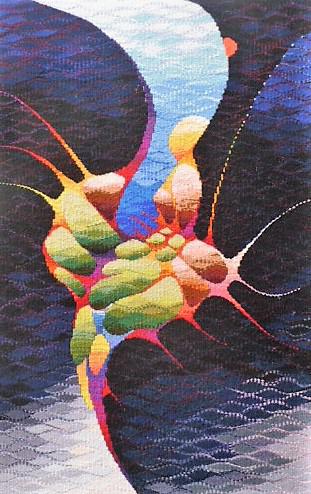 The viewer on approaching my tapestries will first see the colour. Not the colour in isolation but in relation to its neighbour or neighbours. This effect, through the eye and the brain, will change the hue. Not necessarily only creating harmony but also a contrasting vibrancy. Added to this the play of dark and light help create the mysterious, the dramatic, the subtle and a vitality.

“I became aware of the range of subtlety, beauty and trickery, as well as of the mysterious interplay of light within and without,

the light of the Sun

and that of the eye,

combining to create the World.”

Light and dark when combined create a multitude of shades, tones, and a myriad of variations. Not always do we see total single light or total single darkness, this is particularly so with light pollution at night when the wonders of the Milky Way are indistinct and often invisible. In the natural world light and dark are continually changing, morphing from and through a vast range of tones and hues.

Do we notice these subtle changes or are we unaware of them occurring? Perhaps it is only when they impinge on our lives, such as the time in the spring and autumn when the clock changes. Are we really aware of subtle differences and the subtle changes of colour? Throughout the daily cycle these changes occur and are most noticeable at dawn and dusk. From the dark of the night to the bright light of the early morning and the setting of the evening light to encompass the night these transformations seem complete. But even in the dark that is the night, there are differences, the light from the wandering Moon and the distant stars and of manmade light pollution.

The cyclonic nature of our weather and its effects create a continuing changing of colour as the clouds scud across the skies. Highlighted are specific areas, the tops of undulations pick up the strongest light while the recesses hold the darker shadowy hues. Whilst early morning haze create blurred and out of focus forms whose features are only fully revealed when the strength of the Sun clears and disperse the mists.

The coming of dawn, the first light and its attendant colour extravagances indicate that night is almost over. It was whilst travelling in Namibian wilderness that I became aware of the story of the Hottentot God, Heitse-Eibab in the lore of the hunter gatherers the Bushman, or San. These wanderers, a nomadic hunter gatherer race who from the beginning of time, have quarried an understanding of their natural but hostile environment, and are able to live their days through their relationship and deep understanding of their natural worlds. Always aware of the passing of time through nature and the seasons they are not concerned with minutes and hours. For them the cycles of nature and especially of the daily rotation of night and day dominates their routines.

Being observers and witnesses of their surroundings and its constant changes gives insights into much of their actions. Their desert domains create many natural cyclical episodes where the transition of night into day, from dark into light is of paramount importance. The first light before the sun rises is often attended by red in the sky.

Here in the West we have a saying that:

The San peoples see it differently. At first light, prior to the sun rising above the horizon with the streaks and bands of bloodshot and inflamed red they rejoice. Their warrior, Heitse-Eibab, the God of the Hunt, is returning from the battles of the blackness of the night where he confronts the night demons. Success has been achieved for we see in the early morning sky the crimson blood he has spilt. He has dispersed the demons and they will soon be gone and the warmth and the light of the new day will take over.

Within the Hindu and Sikh faiths a great annual celebration takes place every autumn in the northern hemisphere. Called “Diwali” or “Deepavali” which translated means “Festival of Lights”, and the victory of light over darkness, of good over evil, the renewal of life and knowledge over ignorance. It is celebrated on the third day coinciding with the darkest night of the lunar month. During this time the Hindus, Jains and Sikhs illuminate their homes, temples and work spaces with “diyas” an oil lamp, candles and lanterns and is often marked with fireworks and the decoration of floors with “rangoli” designs. Food is of particular importance with many sweets which are taken and exchanged when visiting families and friends.

This great celebration, spread of a few days has to be experienced. Our last trip to India, 2018,

coinciding with Diwali festivities in Mumbai. The streets were thronged beyond capacity with people of all ages, there was no private space for everywhere was public space. From early evening and throughout the night the fireworks lit up the sky and was reflected on to the waters of the Bay, the noise was both constant and intense, the night sky providing a backcloth for a fire storm of multi coloured pyrotechnics. Their variety of shape and form mesmerising, the rockets danced, the fire crackers hopped and the pin wheels pirouetted, they bombarded all our senses. The sight and the acrid smells from the smoke added greatly to the air pollution in this over populated city. In the early morning the smoke and smog hung over India’s most populous city but the dark of the night had been defeated, light was everywhere for a new dawn had arrived.

“Light had triumphed over the dark”.

Throughout the world are similar but different ceremonies with the same purpose of celebrating light over darkness, good over the evil negative energies and understanding over ignorance. In Mexico the “Night of the Witches” when witches and healers descend and arrive to perform mass cleansing ceremonies to rid them of negative energies. In Taiwan and China

lights are floated down rivers to signal that communities and towns are safe. Whilst the Jewish celebrate the eight day festival of “Hanukkah” where eight candles are lit. Many European countries have their own versions which follow similar regeneration and renewal themes.

It is in my tapestry “Triumph of Light over Darkness” that I seek to encapsulate something of this on-going spectacle. This phenomenon seen on a daily basis plays a vital role for all living things as it has done for the past eons. Darkness gives way to the light and strong vibrant colours through a curtain which is gradually opening. The strong contrasts of dark and light help to create a sense of depth and perspective, of the unknown and the visible.

From first witnessing the colours, harmonies and discordant contrasts the shapes are confronted. The eroded rounded shapes suggest a timeless process where change is slow but ongoing. Colour transitions aid and emphasize the hues and tints of the natural world. Cracks appear and progressively increase, wind and water, heat and cold enact their roles to smooth and round. The curved line is based on the concept of change, for a curve is created by a process that is continuously changing its direction and hence the passing of time. From an area of colour to a gradual decrease to a curving contour line and finally to a dotted route towards the edge and the mystery that is the dark.

The verticality in this piece augments the concept of growth, from the earth towards the sky, from the dark strata of sediments to the light of the Sun’s influence. Starting from a base point growth is stimulated and spreads as the curtain of the dark night opens and exposes the influence of the Sun, whilst at the same time in the dark of the night sky the Moon reveals her solitary self. Is it possible to see at the same time the extremes of both night and day, to see light and dark, the known and the unknown?

Let the viewer become aware of the narrative, and enjoy the colours, the shapes and after some time begin to consider and evaluate some of my concepts and thoughts I have attempted to incorporate into this woven tapestry.

“What can we see during the period of light?

The visible, the known?

What can we not see when it is dark?

The invisible, the unknown?

What and when do we see?”