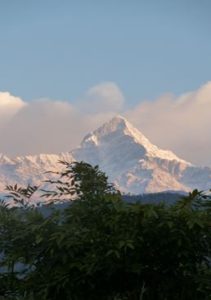 “These mountains belong to the Gods”

The link between man, religion and landscape is vividly seen here in the Himalayan Kingdom of Nepal. Nowhere is this link so vital and embodies the whole of life and the passage into the hereafter, of earthly life and heavenly life. Travelling through this magnificent country, with the high peaks constantly dominating the landscape, one is reminded of this through the variety of religious sites and sounds, the colours of the five elements, Red, Green, Yellow, Blue and White, and the day to day observance of the influences of the Hindu religion. Having travelled and viewed other high places I find that here is the embodiment of the “Tingle zone”. This is that area, or horizon where the physical world meets the spiritual world. The Himalayas act as a bridge from the physical world in which we are born, live and ultimately die to the spiritual world. I feel that these mountains belong to the Gods.

Reading the exploits of Everest climbers brings home not only the great physical challenges and dangers but also the immense and necessary mental and spiritual efforts needed. The final thousand feet to the summits are not for mere flesh and blood, for the climbers must rise above their own human frailties, for only a power within them and without them will they overcome the challenges to attain their ultimate goal.

“Nepal and the High places are half way to Heaven”

The dominant religions in Nepal are Buddhism and Hinduism which emanates from the natural world. Each of the five elements is associated by a colour, earth and the land with green, the air with white, fire with red, blue with water and yellow and orange with religion and enlightenment. This colour scheme is commonly found the country and especially with the wind prayer flags which drape the many religious sites and temples, along with houses and other buildings,

From the populated fertile lowlands and the rolling foothills the Himalayas rise above all. The “Himalayas” is a word from the Sanskrit meaning the “Abode of snows”. The physical world is home to man. These pristine worlds of ice and snow and where the air is clear and sharp, are the high places, where man cannot survive easily, are always there in the sight or in the mind of those who live out their lives in this region. The sun slowly setting changes the colours of the high peaks from pink to lavender and on to purples before attaining the inky cobalt blues of the high altitude skies.  Even in the almost total darkness with its cold black velvet night, and during the magical transformation of the early morning sun and the golden hues giving way to the oranges and yellows and ultimately of the silver peaks of the mountains all combine to enhance the spiritual experience. The ever presence of “light and dark” with its philosophical implications, its relationship with life and death, with the balance between the known and unknown also plays into the mind.

Read More About "These Mountains Belong to the Gods"

This series of tapestries examines much of the relationship between the physical landscape and the spiritual world. The “pathway to enlightenment” which embodies the cyclical life journey through birth, life, death and ultimately rebirth has occupied the thoughts and minds of countless followers of the Hindu and the Buddhist religion. The concepts of the “barrier” or the hurdles of ultimately making this transition are legion, some physical some psychological. These ideas are embodied in the many temples, sacred sites with their myriad stone carvings and friezes, along with the mesmerising sights and sounds of the prayer wheels kept rotating by the hands of devotees. The other sight which I found stunningly simple but beautiful through its application is that of the “wind prayer flags”. These long strings of repetitive red, green, yellow, blue and white fabrics, printed with prayers are stretched between trees, on roadside bushes and used to decorate major buildings and temples and flutter, flap in the breeze.

Many of the designs incorporate the pathways through and beyond the religious barriers to the ultimate life cycles of the Hindu and Buddhists religions. As a metaphor I have used the rolling, folding landscape forms of the lower slopes where man has created a living environment. These interlocking shapes are also echoed in the depiction of fire with its importance for the continuing after life through the cremation ceremonies and the giving of the remains to the sacred waters of the Ganges.

During my travels through Nepal the rich fertile land surrounding the villages, farms and hamlets I was struck by the vast skies and the majestic cloud formations. The road system and the pathways although extensive with many rickety bridges spanning deep gorges seemed always busy with motorised traffic and people walking, many with heavy loads. Of heavily laden bicycles and motor scooters, of donkeys and horse drawn wagons, it is a busy bustling place. But there was always, high up above the immediate horizon and the clouds, was this other visible world. The high places seemed to belong to another place. It was so high and far, the peaks a pattern of snow and rock stretched along this other horizon. At times the cloud and lower mists obscured this other land but I was very much still awareness of its presence. Just because it was unseen, invisible its presence was tangible and there was something of relief when the sky cleared and the tops came back into view. It made me wonder if what I was viewing was real and physical or was it in my mind, a psychological occurrence. It sent shivers up my spine and was akin to the feelings I had experienced in the great nave of the cathedral at Chartres or in other western European Gothic edifices. If this is spiritual then I most certainly was receptive to these events. 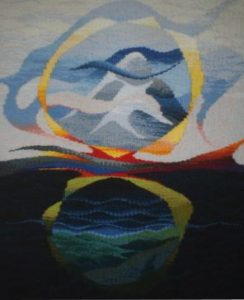 “A faint indistinct outline of the high mountains, blue against the blue of the horizon. It was so far away that it seemed an illusion, insubstantial and ethereal, it was of mist and air rather than of earth and rock.

These mountains belong to the God’s.”

This series of paintings and tapestries continue my ongoing concepts relating to the flowing, cyclical world of nature. The fundamental interlocking shapes of a rolling landscape and the massive edifices of the high places are central. They offer both a pathway and a barrier to enlightenment and the spiritual world. The wind prayer flags, in blue, white, green, red and yellow so redolent of the religion of this region are my palette. Each colour with its own deep meaning perhaps offer the viewer the first entry to the design. The earthly landscape of earth, water and air are joined by fire. The latter being the means whereby cremation and the giving of the remains to the waters of the Ganges, thus completing the bird, life, and death and rebirth cycle. To the glorious yellow gold’s of religious enlightenment and the attainment to spiritual world. Many of these designs incorporate pathways through and above the physical landscape and the natural world. Only in these majestic areas of the high places where man can barely survive can we feel that we are at the point of departure to a world above

It was during our second visit to Nepal that I wrote in my diary the following:

“Prior to the fall of night, the high peaks once lit by the warming sun change as the sun sets. From pinks, through lavender to purple all with the background of the deep cobalt blues of the sky at high altitude the scene is transformed. In almost total darkness the velvet dark signals the wait for sunrise when the orange and gold change through yellows to platinum and silver. I can only imagine the sights and scenes which are witnessed on the peaks by the mighty efforts of climbers…..and through the small windows on an early morning “Everest” flight.” 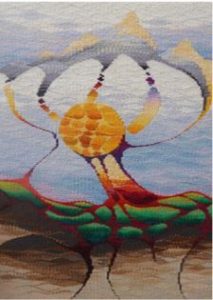 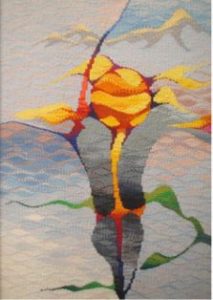 “The mountains have that aura of beauty that needs no words.

You look around and see all that God has created, and this is the most beautiful and wondrous thing that can happen to you.”

These thoughts and concepts for the four tapestry designs are the results of our four visits to Nepal and the High Places.